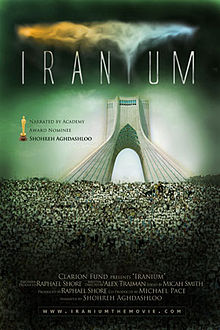 It is literally the film that Iran does not want you to see. Canceled twice from being screened in Canada’s National Library and Archives due to Iranian pressure, government officials eventually stepped in and it was finally shown to a sold out crowd. Brought to you by the creators of Obsession, Iranium uses graphics, experts in the field, and archival footage to examine the growing threat Iran poses to the West. Interviews with top policy makers and politicians, such as Shelley Berkley (US House Rep), R. James Woolsey, Jr. (former CIA director) and John Bolton (former US Ambassador to the UN), and primary source video clips of Iranian leaders illustrate the culture of militant anti-Semitism and anti-Americanism currently fostered in Iran.

The film creates a vivid contrast between the relatively free society of Iran in the 1970s to the current Islamic theocracy that took hold with the 1979 Iranian revolution and the overthrow of the Shah.

Unfortunately Iranium omits some vital detail about the American-Iranian relationship. It implies that the American hostages were released due to the Islamic regime’s fear of Reagan, a claim that is unsubstantiated. Carter’s tough rhetoric on Iran and his failed attempt to rescue the hostages by force is glossed over as well. Neither is the Iran-Contra affair mentioned, in which the United States sold weapons to Iran during Reagan’s presidency.

The film starts with a brief overview of the coming to power of the current regime, covers past actions against the American and Jewish targets, as well as current threats against the US and her allies. Much of the focus in the film is on the three decades of American diplomatic and tactical failure, as well as the rhetoric and actions taken by the Islamic Republic of Iran against the United States and other democracies.

From President Carter’s difficulty in resolving the hostage crises with diplomacy in 1979-81, and President Reagan ordering troops to retreat from Lebanon following attacks from Iran’s proxy Hizbullah in 1983, to Iran’s current meddling in Iraq, and current sanctions inability to halt Iran’s feared drive towards nuclear weapons, Iran has been covertly engaging in war for over three decades. Thus, Iranium aids us in understanding some of the context behind the worldwide fear regarding the current Iranian drive to develop her nuclear program. Though, given the rapid new developments regarding Iran, parts of the film are already becoming outdated.

This film is moving, fast paced and superbly edited. When young children are shown passionately marching towards mine fields, with the hopes of clearing them and becoming martyrs, the filmmakers allude to the idea that if Iran is willing to send its children to their deaths, where exactly are their red lines?