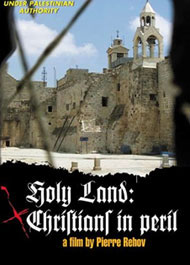 The film Christians in Peril is a shocking documentary that reveals how dangerous a situation it is for many Christians living in areas under Islamic rule. Pierre Rehov, an articulate English-speaking French journalist, reveals the shocking reality of the turmoil that is present in the Middle East region. Rehov’s accounts in this film are based on substantiated evidence accumulated in interviews, images. Rehov took on the unpopular task of presenting the plight and persecution of Christians in the Palestinian territories.  His first hand narrative on why there has been a massive Christian Exodus from the Middle East is thought provoking and makes people question the media's perpetuated, anti-Israel rhetoric.

Although there was a great deal of substance presented in this short twenty-minute documentary, the presentation needed greater focus at times. This documentary would have a hard time persuading those who don’t have strong feelings regarding the Middle Eastern conflict to side with Rehov’s viewpoint. In his presentation he often uses the word “they” which slightly insinuates that the Palestinians should automatically assumed to be the enemy. Furthermore, the use of dramatic music did not increase the credibility of the presentation. Despite the presentational lackings, the content was adequate and accurately depicted the malice shown towards Christians and Jews in the Palestinian territory.