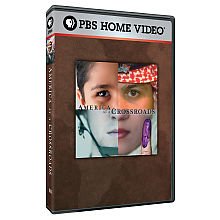 Producer/Director: Bill Jersey
Executive Producer: William Free
55 minutes, English
"Campus Battleground" was commissioned by the Corporation for Public Broadcasting (CPB) as part of the "America At a Crossroads" series which is produced under the supervision of Washington D.C. PBS station WETA. It premiered on November 27, 2007.

"Before we make bombs, before we make walls, we make ideas. What goes on in colleges and universities is fundamental. It is the origination of ideas and values."  —Bill Jersey, Producer/Director of Campus Battleground

The acclaimed producer/director team of William Free and Bill Jersey purport to show how "…the American university has often been …a combat zone where partisan groups forcefully and sometimes fiercely argue their positions on national and world affairs" by making a documentary about "students [who] struggle over the competing claims of Zionism and Palestinian nationalism, over what history teaches, and whether absolute demands can ever lead to honorable compromise." To that end, they focus on pro-Palestinian and pro-Israel students at  the University of California-Berkeley and Columbia University during the 2006 Spring semester. Several activist Arab and Jewish students appear individually on camera, speaking at length to an unseen, unheard interviewer. The film also includes footage from protest demonstrations, a class lecture, and student gatherings addressed by well-known pro-Palestinian or pro-Israel speakers.

The documentary is marred by significant omissions which result in misleading images both of the situation on North American campuses and the Israeli-Palestinian conflict itself. For example:

1) There is no mention of serious instances of pro-Palestinian intimidation and violence on campus such as Concordia/Montreal (2002).

2) The film fails to adequately deal with the problems arising from the fact that numerous instructors on American campuses indoctrinate students with false teachings defaming Israel. The filmmakers only briefly allude to complaints of such activities at Columbia University. These activities on American campuses have been documented by Campus Watch and CAMERA.

Since the filmmakers chose to focus on a single college class dealing with Middle East history, why was it one whose teacher provides only a Palestinian perspective? Is there not another class that could have also been shown — one that could present an alternate perspective?  There is no footage of a class that discusses the obstacles to a viable resolution to the Palestinian-Israeli conflict, for example, the Islamo-fascist parties who refuse to accept the existence of Israel and instead incite violence against Israelis? On the other hand, if no such class exists, what does this say about intellectual freedom and diversity on campus especially in light of Bill Jersey's apt observation, "It (the university) is the origination of ideas and values."

4) Similarly,  the film displays the mainstream Palestinian perspective opposing Israeli security checkpoints and the security barrier but fails to provide a mainstream Israeli perspective explaining the need for these measures.

On the Berkeley Campus

Among the several students who speak on camera, two are featured and skillfully contrasted by the filmmakers.

Here, the filmmakers forgo the opportunity to enlighten viewers by challenging the Arab student's misperception, namely, that the Arab-Israeli conflict stems from a 3000-year-old feud between Jews and Arabs. During Biblical times, in fact, there were few if any Arabs in the land then known as Israel. This changed during the Arab conquest of the region — not 3000 years ago, as Salahi states, but 1300 years ago in the 7th century — with the advent of Islam.  This is described, for example, in Islamic Imperialism: A History (Yale University Press (2006);  updated paperback version (2007)) by Middle East historian Efraim Karsh.)

Yaman Salahi comes across as articulate and self-confident — even charismatic. Salahi's effective, polemical utterances — shown several times throughout the film — stand in sharp contrast to Avi Criden's introspective, self-questioning statements. The selection of a confident Arab student versus a self-doubting Israeli student as exemplars of the debate on campus influences the entire tone of the film and raises questions about the filmmakers' agenda.

Near the beginning of the film, the narrator tells viewers, "For Israeli Avi Criden, taking Berkeley professor Beshara Doumani's class on the history of Palestine and the Arab-Israeli conflict is an opportunity to examine Israel's history from a different point of view." Doumani is shown lecturing from a Palestinian perspective. "Professor Doumani was born in Saudi Arabia. He is the son of a Palestinian refugee," says the narrator.

I've been struggling with having any kind of hope, especially lately. I remember as a kid I used to have a lot of hope, but after Yitzhak Rabin got assassinated, and especially during the second intifada, when it started during my military service. Um… I' m not sure I speak for most Israelis, but I do think it' s very common, this kind of lack of any kind of hope towards any kind of resolution. And I was always interested if somebody like me on the other side, 25, 26… Um… Do they have hope?

Doumani encourages his student, saying, "I think both populations have been really ill-served by their leaderships" to which the self-doubting Israeli responds, "There' s a lot to explain about Israeli society."  Criden also appears defensive about his military service.

The narrator: "Avi' s mandatory military service gave him a different perspective on the class and the conflict."

Outside of class, Criden explains:

I mean, you' re put in a position where there' s no win either way. You' re 18 years old and you've got an angry staff sergeant on your head yelling at you, spitting in your face, and a pregnant woman on one side who could actually be a suicide bomber, and it depends how you look at it. And it depends on how you woke up that morning, and, you know?

This type of defensiveness and self-doubt is underscored by the professor's unapologetic, pro-Palestinian perspective.

At one point, Professor Doumani points to a display screen as he indoctrinates his students:

So what the wall does is — it actually goes around where the Palestinians live in Qalqilya, takes away all their land, here and here, and gives it to settlements, or if there' s already existing settlements, and other villages that already exist in the area, they will also be surrounded by walls so that the areas in between them will be for Israelis to be able to move freely.

Viewers of this documentary film are thus exposed only to the pro-Palestinian side of the controversy about Israel's security barrier. They are never informed that many Israeli lives have been saved as a result of the dramatic decrease in suicide bombings thanks largely to the barrier and checkpoints. Because of its success, the security barrier spared the lives of many Palestinians as well, since it has eliminated the need for large scale Israeli incursions into the West Bank to root out terrorists, as in 2002.

This one-sided portrayal of the Palestinian-Israeli conflict is emphasized with footage of a mock Israeli security checkpoint set up by pro-Palestinian activists on the  Berkeley campus. (Picture of checkpoint sign: "Palestinians must have ID ready")

At the mock Israeli checkpoint, anti-Israel activists, wearing military garb, guard one direction marked for Israelis and another one marked for Palestinians, demanding to see students' IDs. and declaring the area "occupied territory."

On the Columbia Campus

Among the several students speaking on camera, two are featured and skillfully contrasted by the filmmakers. Viewers meet Bari Weiss, a  Jewish activist student at Columbia, who is more effective in expressing a pro-Israel perspective than was the Berkeley student. Her counterpart, Khadijah Abdul Nabi, raised in the Bronx, has come to embrace her Muslim faith, even to wear the hijab, after a secular upbringing.

At the invitation of Arab student leaders, anti-Israel professor Norman Finkelstein lectures to students at Columbia. Finkelstein, who has little credibility in most academic circles, tells his audience what most of them have come to hear:

The argument I'm going to make this evening is that the vast amount, the vast preponderance of controversy that swirls around the conflict is actually contrived. It's fabricated. It's artificial. And while Hamas sometimes talks about destroying the Jewish state, Israel is in practice– not in words, not in talk– Israel is in practice, as we speak now, they are dismembering and destroying the Palestinian state [applause] and no demand is being put on Israel to renounce terrorism as a condition for international acceptance. That' s hypocrisy [applause].

The film could have included the fact that Hamas, whose charter calls for the destruction of Israel, is trying to destroy the Jewish state in practice through suicide bombings and rocket attacks. But there is no challenge of Finkelstein's outrageous, false, anti-Israel accusations.  Neither does the film provide important background information about the speaker, namely that he was denied tenure at every university at which he'd worked, most recently from DePaul University (which took place several months before the premiere broadcast of  "Campus Battleground").  DePaul's Dean of Liberal Arts and Sciences, in opposing tenure for Finkelstein, said of him: "I must say that I find this very characteristic aspect of his scholarship to compromise its value and find it to be reflective of an ideologue and polemicist who has a rather hurtful and mean-spirited sub-text to his critical scholarship."  But rather than include anything that might detract from Finkelstein's credibility, the film identifies him only as a DePaul University professor.

In a public lecture, Mr. Dershowitz makes a strong, pro-Israel case while contending with combative pro-Palestinian students but  is not shown responding directly to Finkelstein whose scholarship he had so strongly previously criticized.