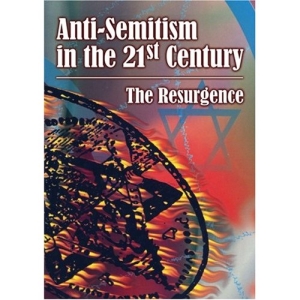 In January of 2007, PBS premiered a documentary entitled "Anti-Semitism in the 21st Century: The Resurgence." It was written, produced and directed by Andrew Goldberg, in association with Oregon Public Broadcasting, and hosted by Judy Woodruff. The film provides a compelling look at how widespread and virulent anti-Semitism is in the Muslim world today. The vast majority of the documentary is an eye-opening tour de force.

The documentary includes a rare examination of the vicious depictions and dehumanization of Jews in Arab TV shows, cartoons and speeches delivered to millions of Muslims all over the world via satellite TV and the Internet. A diverse group of commentators speak of the popularity in the Arab and Muslim world of anti-Semitic conspiracy theories (e.g., the "blood libel," 9/11 as an Israeli or Jewish plot, and the Protocols of the Elders of Zion). Columnist Mona Eltahawy and author Reza Aslan do a remarkable job explaining how Arab/Muslim leaders often fan the flames of anti-Semitism to further their own interests.

The film provides significant context regarding Jewish historical ties to the land of Israel, but oddly enough, there is no mention of the fact that beginning in approximately 1000 BCE, the Jews lived in their own sovereign Jewish kingdom(s) of Israel and Judah, which today is the site of Israel and the West Bank.

While the documentary is ambitious in the scope of material it covers, there is hardly any examination of a key issue: how anti-Zionism and anti-Israel positions are often used as a cover for anti-Semitism. The rise in anti-Semitism in Europe is addressed, but the British Parliamentary report on anti-Semitism is not mentioned, nor is an analysis from the European Monitoring Centre on Racism and Xenophobia (EUMC), which explains how to assess when valid criticism of Israel crosses the line into anti-Semitism:

A significant amount of time is spent exploring how anger at Israel's existence or actions might be a cause of anti-Semitism (rather than a symptom), while relatively brief mention is given to the important question of how reform in the Muslim and Arab world might help reduce the scapegoating of Israel and the Jews.

Rashid Khalidi, for instance, says that various alleged Israeli misdeeds are what feed modern-day anti-Semitism. Former Israeli cabinet minister/author Natan Sharansky and American Jewish Committee Executive Director David Harris then argue that whether Israel is right or wrong and whether there are political disagreements between Jews and Arabs, there is no excuse for anti-Semitism. This is certainly true, but doesn't directly address the false claims of Rashid Khalidi and others against Israel.

Some may feel that Khalidi's remarks were so obviously propagandistic that they don't need to be rebutted. But the possibility remains that some viewers unfamiliar with the relevant history may be left with the mistaken impressions that Israel's very existence is a terrible injustice to the Palestinians, that the Jews' historic connection to the land was always one of being a minority within a Muslim majority, and that Arab/Muslim rage against Israel's Jews is understandable and logically connected to anti-Semitism against Jews worldwide.

Overall, though, the documentary's information about historic and modern-day anti-Semitism is riveting, extensive and highly educational.